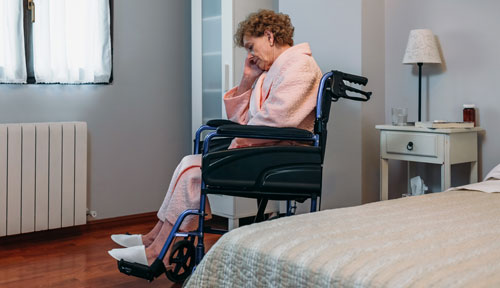 The current world-wide public health crisis has drawn attention to the fact that seniors with disabilities are at the highest risk of becoming ill after exposure to COVID-19. Nursing homes are facing incredible challenges in terms of maintaining social and physical distancing. They have been forced to prioritize isolation as a way to save lives. For example, residents are not allowed to have visitors and are unable to take advantage of traditional activities that would promote connectedness as well as intellectual engagement. They cannot attend social gatherings, they cannot eat together while chit-chatting and they are being isolated in their rooms. Residents may only be physically close to their caregivers. Even when residents have roommates, they need to maintain physical distancing, and the risk of having conflicts with each other almost seems to be inevitable.

We cannot assume that the residents are not aware of what is going on in the “outside world,” that they are at high risk of being exposed, becoming ill and dying. Those who have been designated to serve as healthcare power-of-attorney may need to have difficult conversations if it seems likely that legal documents may not be followed and final wishes may not be implemented. For those who are unable to understand the ramifications, these urgent conversations may not be able to take place.

Residents may feel incredibly disempowered and question their worth, especially as they hear ethical questions being discussed in the news. In particular, people in the media seem to be talking about who may have the highest probability of surviving the coronavirus and, therefore, whose life is more worth saving, and suggesting that older adults should sacrifice their lives for the young. Understandably, these discussions can lead some people to feel that their lives are not valued.

In the past, forcing a victim to remain isolated, to not have contact with others, was seen as a red flag for elder abuse. Now, that isolation is required. The challenges now are to ensure that nursing home residents maintain quality of life, that they are not abused in the process of saving others’ lives, and that we find a way to ensure that they feel safe and are not traumatized and re-traumatized. This matters even if a resident is not totally aware of what is happening due to dementia or serious cognitive impairment.

Let’s be on alert for these ethical issues now, and not look back and wish we had advocated more urgently for seniors with disabilities in nursing homes. Let the world’s legacy not be one of engaging in elder abuse at a widespread level, when future historians and ethicists look at what was done during this pandemic.

Elder Abuse in Nursing Homes Before the Pandemic

Before the pandemic, one in three residents in nursing homes experienced harm, according to a 2014 report by the HHS Office of Inspector General. ”Harm,” in this case, included falls, pressure ulcers, acute kidney injury, infections and excessive bleeding due to drug use. A 2019 report by the U.S. Government Accountability Office focused on the need for increased and better oversight to protect nursing home residents from being abused. Between 2013 and 2017, the number of regulatory noncompliance findings due to abuse doubled, with the greatest increase happening in cases of abuse at the highest level of severity.
In light of the current public health crisis, one could argue that infections should be and will be given greater scrutiny, since the coronavirus can result in death. Exposure and poor infectious disease control can place many residents in immediate jeopardy.

Those nursing homes that have been cited for incidents of abuse have certain similarities: high staff turnover rates, low staff-to-resident ratios, and a track record of being cited for abuse. Information about staff-to-resident ratios (e.g., low numbers of nurses caring for high numbers of residents) is reported on Nursing Home Compare, and is built into ratings of quality of care. All of these qualities are expected to be exacerbated during the COVID-19 pandemic.

Residents who are at highest risk of being abused have similar characteristics: poor health, functional limitations and dependence on their caregivers, dementia and/or mental illness. These characteristics can also make it difficult for them to reach out for help if they’re being abused.

In a well-designed research study conducted by Pillemer et al (2014), findings suggested that one in five nursing home residents were abused by their peers. Forms of resident-to-resident abuse include verbal abuse, physical abuse and sexual abuse. Notably, residents with disabilities linked with mental illness or dementia were at highest risk of being victimized. The same category of residents were also more likely to be perpetrators.

In addition to incidents of resident-to-resident “abuse,” other forms of mistreatment that are not willful may occur in nursing homes. Examples include invasion of privacy (coming into someone’s room without permission, using his or her personal property), conflicts between roommates, and bullying. Those who are disruptive may be mistreated as well. An example of a disruptive behavior is when a resident yells or cries out repeatedly and repetitively. These disruptions may trigger arguments, conflicts and physical altercations. It is important for staff to recognize and identify the cause or causes for disruptive behaviors, such as when the resident is unable to verbally express that she is in pain or has been abused, and to take action to get that person the support they need.

Nursing home residents are particularly at risk of elder abuse and neglect in nursing homes at this time. Before the pandemic, nursing homes with low staff-to-patient ratios, high staff turnover, were more likely to be cited for incidents of elder abuse. Now, along with nursing home residents who contract the coronavirus, the frontline workers (nursing assistants) are at high risk of exposure and becoming ill themselves. High staff turnover and inadequate staffing levels has been problematic in nursing homes in the past, and now staff may not show up for work due to fear, may become ill and have to self-quarantine, and may quit their jobs. It is unlikely that individuals will apply for jobs in nursing homes at this time because the facilities border on being tombs for both residents and staff. Some nursing homes have been forced to close their doors due to inadequate staffing, going well beyond what would have been referred to as “inadequate” in the past.

Residents are even more at risk of being neglected as nursing home staffing levels are extremely inadequate and resources to draw upon are decreasing during this pandemic. Overall, there will be lower oversight of nursing home staff by directors of nursing, by (increasingly limited numbers of) charge nurses on nursing home wings, and by administrators. There is no way that there can be sufficient numbers of “eyes” watching over what is going on. Nursing staff may be afraid to go into rooms and get close to patients to adequately care for them, some of whom are becoming increasingly ill and fragile, even when taking safety precautions. All staff members are under stress, markedly more than what they may have experienced in the past. As the COVID-19 spreads into more nursing homes, as clusters of residents become tested positive and die, as staffing levels markedly decrease, the risks of abuse and neglect escalate astronomically nationwide.

Nursing home residents will continue to be placed at risk of abuse and neglect due to ongoing restrictions for physical distancing, for remaining isolated.

Our system – bridging multiple partners and working collaboratively – needs to adapt to the problems arising during this pandemic. We must do everything possible to protect those who are most vulnerable, those who at risk of elder abuse and neglect, those who are being exposed to, contracting and dying from COVID-19. The Adult Advocacy Centers have issued an offer to help crime victims’ rights groups better serve those who have been victimized. With regard to preserving safety of our seniors, it is urgent to bridge the aging network, the mental health system, long-term care professionals, and aging researchers/experts, and work together rather than in silos. Training and education about use of trauma-informed care must be prioritized, as reflected in the Adult Advocacy Centers’ Model. In short, every contact with a nursing home resident and nursing home staff member should reflect a trauma-informed care approach and a watchful eye, knowing that what we are dealing with now is trauma pure and simple.

Those who want to do their research about facilities for themselves or their loved ones have some tools available to them. Specifically, on the Medicare Nursing Home Compare website, there is a bright red icon by names of nursing homes that have been cited for abuse issues. The public can also review reports compiled by the Ohio Department of Health after an investigation has taken place. Seniors with disabilities, family members and advocates can take this knowledge and use it to ask important questions when considering nursing homes. For instance, they could ask, “What have you implemented to ensure that abuse does not happen again?” Likewise, professionals who provide guidance about nursing home placement have this information at their fingertips about nursing homes that have had violations and can use it to better serve their clients.

Diana Spore is an advocate for individuals facing mental health challenges and those who are living with dementia, a writer/editor, and a mental health consumer in recovery. Spore received her Master’s degree in Gerontological Studies from Miami University (Ohio), and earned a PhD in Human Development and Family Studies, with a concentration in aging, from Penn State. She completed postdoctoral training at Brown University. Spore’s areas of expertise include mental health and aging, mental health recovery and trauma-informed care, medication optimization, long-term care, caregiving, and psychotropic drug use and inappropriate drug use among older adults. She is a former Board member of the Mental Health and Recovery Board of Ashland County (Ohio; MHRB). She was Editor-of-Chief of TAPESTRY OF OUR LIVES, an anthology of works created by individuals in recovery, a project that was done under the auspices of the MHRB. Spore served as Project Lead for a “Writing for Recovery” initiative, MHRB, and engaged in all aspects of the project, which has resulted in sustained spin-off efforts. Currently, she is a consultant at the MHRB, and serves as a facilitator of a “writing for recovery” writing group, which is under the auspices of Catholic Charities’ Pathways Peer Support Program, Ashland. Diana Spore has expertise in creative writing, writing for recovery, journaling for caregivers, legacy writing, and advocacy writing.